When I wrote this in 2014 I was a little emotional about it. You would think I would calm down after 6 years, but I am updating this because, well, I’m mad.

How Bait And Switch Happens 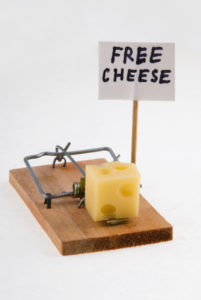 Get the picture? Something is being offered that is not going to turn out well. The person who set that trap knew what they were doing and (for life insurance purposes) the person that believes the offer doesn’t know what’s coming. In life insurance it starts with an agent giving you a quote. They give the appearance of due diligence by asking health and life style questions and then, even though they know you don’t qualify, they quote you the best rate available.

It might go like this. You don’t have any health issues but you’re a bit overweight at 6’1, 255#. The agent ignores that piece of information and quotes you as a 47 year old male, $500,000 of 20 year term at $650 a year. The bait is the low price even though you may smell something wrong. You proceed with an application and when the approval comes through it is at $1226 a year, the switch. In a lot of transactions people would just walk away. But the agent explains that after finding out about the high approval due to your weight, they checked a bunch of other companies and, well, the $1226 is really the best you’re going to find. With this new knowledge they recommend you accept the offer rather than wasting time trying to apply elsewhere.

The problem is they lied to you to get your to apply with them and, almost always the “best you’re going to find” line is their second lie. They didn’t really check around or really didn’t want to work harder for you or they would have been able to switch to another company at $812 a year.

Why Bait And Switch Works

The bottom line answer is that the application process usually takes a few weeks to a month, sometimes more if medical records need reviewed. Part of the switch is to make you believe you will have to do it all over again, using more of your valuable time and, more importantly, delaying important family or business protection. That is patently false, just like the rest of the game the agent is playing. If you’ve been through the process and your agent has the exam and medical records, it should take no more than a week to turn to that $812 company and get a new policy approved. Never mind that the agent knew your weight and should have gone to that company to start with.

Which raises the question, why didn’t he go to the lower cost company to start with? Agents are paid on commission, a percentage of the first year premium (what you pay). The agent knows they will make more at $1226 than $812. Quoting you a low price that you won’t qualify for is a means to the end of selling you a lot higher price policy and making more money. Greed and dishonesty!

If It Sounds Too Good

When someone intentionally misleads me I have a real guttural reaction, but I usually don’t hurt them in spite of it. Having said that, the last thing I do is business with them. In life insurance being intentionally misled is called bait and switch. It’s illegal but rarely turned into state insurance commissions. A recent example is a guy who came to me for quotes. He didn’t have health issues but his height and weight, 5’7, 224, doesn’t fit into anyone’s best rate class underwriting. I gave him a realistic quote and he said he had two other quotes substantially lower. He shared the quote with me and I sent him the underwriting guide for those companies clearly showing the bad news. He decided to go with one of the agents that quoted him a lower rate. That free cheese works even if you’ve seen the facts.

So, he has been baited by low quotes. He will likely be approved at a much higher rate and the agent will call and give some song and dance about why the rate came back higher. He will then assure the client that even if he doesn’t accept it and tries again with another company the outcome will be the same (duh!). “So, why Mr Client go through the underwriting process again? Just accept this and you’re done. Sorry it’s not what you expected but that is the nature of life insurance underwriting.” Well, BS! That isn’t the nature of life insurance underwriting at all. Life insurance companies make very clear guidelines available to all agents for the simple things like build, blood pressure, cholesterol, family history and so on. They aren’t ambiguous and they might allow you to fudge a pound or two, but only if you ask ahead of time.

And even with more complicated life insurance impairments like coronary artery disease or bipolar disorder, if an agent does the job correctly they will shop the case and the nature of the process then is that the policy will be approved at the rate quoted most of the time. I just don’t understand in a day when internet access can tell people the reality of what to expect, that they would go for the bait and then, the real crime, accept the agent’s lame excuse for the switch and accept the life insurance policy.

Want The Best Price And, Well, A Little Revenge?

If I desperately needed the life insurance in force, the most I would give a dirt ball bait and switch life insurance agent, is to put the policy in force on a monthly basis. I would then ask for a copy of the labs and call an independent agent and ask for accurate quotes, explaining that you absolutely know accurate from not accurate. As soon as you put a new policy in force cancel the first life insurance policy. This method has a bit of revenge built into it. Agents are paid a commission on premium paid, so the agent might make commission for a few months at the most. Just enough time for him to forget who you are. Then, because a policy has to stay in force for a year to actually earn the commission, when you cancel the company will charge the agent back for the money they made. I’m not huge into revenge, but life insurance agents who intentionally lie to you to get your business deserve to lose the sale and lose some money they probably already spent because they assume you’re going to just roll over and take it.

Life insurance bait and switch is against the law and against any kind or moral or ethical behavior you can think of. If you have questions, or believe that someone has quoted you low when they should have known better, call or email me directly. My name is Ed Hinerman. Let’s talk.