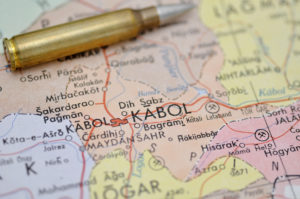 I just got off the phone with a client who renewed their war zone coverage for the 7th year. With a few electronic forms he is good to go for another year. Over the last 15 years we have helped civilian contractors find the protection they need working in Afghanistan, Iraq, Syria, Somalia and other places that aren’t on anyone’s vacation list. We offer policies specifically designed for the types of risks civilian contractors encounter, provided by one of the oldest and largest special risk companies in the world, Lloyd’s of London.

What is and isn’t covered!

Let’s start with what isn’t covered. Policies written for coverage in war zones and other dangerous areas don’t cover natural causes of death. These are accidental death and dismemberment policies that cover any accidental death including death due to acts of war and terrorism. There isn’t any questions that the leading cause of death for civilian contractors abroad is acts of war or terrorism. I highly recommend not just going for the basic accidental death, but paying the small amount extra for dismemberment coverage. Anyone who has paid attention to the middle east wars knows that losing limbs happens at a much higher rate than death.

While you are employed, even part time, in a dangerous area, you won’t be able to find a company that will offer you protection for natural causes such as heart attacks or cancer. That puts long term life insurance planning on hold until you come home with no plans to go back.

I often get calls or emails from people who are due to leave for their new job overseas in a week or less. It generally only takes a few hours to get a quote for the insurance from the underwriters. The information they need in order to provide a proposal is pretty minimal. 1. Your name, state of residence, and age. 2. Where you will be working, country, area, on or off base, etc. 3. Who you will be working for and what your duties will be. 3. The amount(s) of insurance you would like to have quoted. I should note that if you aren’t a US citizen we can only offer you coverage if you are working for an American based company.

Once you get the proposal and choose your coverage, you simply complete the one page application and the payment authorization and send it back. If you are already at your work location and need esign documents because, for instance, there is no printer or scanner available, just ask when you make your first contact and we can accommodate that need. Once those documents are in to the underwriters they can generally bind coverage in 24-48 hours. The whole process from first contact to being covered can take as little as 3-4 days. That’s pretty “right now” in the insurance world.

If you have questions or would like to discuss options or get quotes, call or email me directly. My name is Ed Hinerman. Let’s talk.