With nearly a quarter of my clients being commercial and private pilots I thought I had worked my way through all of the obvious mistakes in pilot life insurance underwriting, but I missed one this week. In the end no harm, no foul as I can move it to another company and get the approval we need for the same price, but I felt bad.

This case involves a corporate pilot. He has plenty of hours and has been flying for his company in a Cessna 421 for years. On the surface he appeared to be a great candidate for Prudential’s aviation life insurance underwriting for their best rate class so I was shocked when they came back with an approval at standard and a $2.50 flat extra per thousand. Because of the hilarious nature of it I am going to share the actual approval email I got from Pru.

“This case has been approved other than applied at Non-Smoker rates with $2.50 permanent flat extra due to the client’s aviation activity as a pilot. The reason is because of the client’s aircraft being a smaller Cessna model plane, these smaller aircraft are statistically more likely to be involved in aviation accidents.” 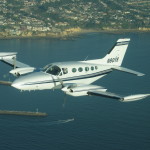 All righty then. I’m thinking if I were asked to characterize a Cessna 421 I might not pick the words “a smaller Cessna model plane” which just added to the major bafflement I had going on. So, after asking the underwriter to explain what part of that 42′ wingspan was small and dangerous I was informed that Pru considers any corporate plane with less than 10 seats and not jet powered to be too small to be a corporate plane. And I suppose that they, being the Rock, consider a corporation small when they choose to only spend $400,000 on their corporate air taxi. Maybe you’re not really safe until you spend a couple of million or something like Pru can afford?

Ok. Having sufficiently bashed Pru’s logic on this decision I will own up to the fact that if I had read deeper in their aviation guidelines I would have discovered this idiosyncrasy of theirs and gone to another company to start with. I honestly just never imagined, but my bad. My client is now safely tucked away with a company whose underwriter believes that the 421, while kind of tiny, ugly and underpowered, is adequate for corporate aviation and the pilot life insurance rates that go along with it.

Not all companies see mortality risk through the same glasses. In this case Pru puts this pilot in the same risk category as they do a student pilot. That makes some sense. A commercial IFR pilot with thousands of hours in a 421 and a student on his first solo flight in a 172 is pretty apples for apples comparison…..as in honey crisp and crab kind of apples for apples….?

Bottom line. For me a reminder to shop for quotes on even the most straight forward of life insurance scenarios. You just never know what’s in the fine print or what kind of a mood the underwriter might be in. For my private and commercial pilot clients a reminder to read the instruction manual on their ride and make sure it doesn’t say small and dangerous in the fine print. If you have any questions, or have received an unexpected whacking due to your aviation activities, call or email me directly. My name is Ed Hinerman. Let’s talk and I promise to double check the underwriting before I provide a quote.

“I would gladly recommend Ed Hinerman to businessmen anywhere. When my New York Life agent told me that my 80 year old business partner couldn’t get life insurance, Ed not only got it for us, but at preferred rates. It was key to our buy/sell agreement and when he passed away last year I was able to buy his share of the company from his family with the life insurance proceeds. Thanks for going the extra mile.”