I’ve talked before about Pan American Life Insurance and the fact that they will underwrite foreign nationals, mostly from Central and South America and the Caribbean. The only caveat is that they have to travel to Florida to complete the application and exam.

This week I followed up on a case I had run by Pan American last year. At that time this businessman from 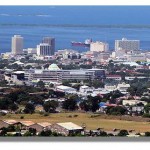 Kingston Jamaica had just finished treatment for prostate cancer and Pan American said they wanted to postpone a year and then would consider a rated policy.

From a life insurance underwriting standpoint one year out made it a perfect case. The client’s PSA at the time of diagnosis was 5.84. The surgical pathology after his prostatectomy showed the cancer to be a Gleason grade 6 and stage T2. All tests since the operation have shown his PSA at 0. If this guy was an American citizen I could get him a standard plus rate at this point.

I submitted a quote request to Pan American now that we are a year out and they came back with a tentative quote of standard and $7.50 flat extra for 3 years. Well, they said it would be rated! And to compound the high rate and especially the flat extra, Pam American has a minimum face amount for term insurance of $500,000. I ran the rates for the client. The $500,000 of 20 year term at a standard rate was $3700 a year for this 57 year old. The $7.50 flat extra times the $500k works out to an additional $3750 for the first three years. So, $7450 a year for three years and then $3700 a year for the remaining 17 years of the term insurance.

I decided to go ahead and shop the case through my regular US carriers knowing that non US residents residing outside the US are pretty taboo. The only “in” I saw with this case was that his company in Jamaica had an affiliation with a company in Maryland. It wasn’t the same company, but they had an ongoing contractual relationship. You never know until you shop it, right?

I got all my responses in today and to my amazement 4 US carriers said they would underwrite the policy as long as my client was willing to come to the US to do the application and exam and then again to accept delivery of the policy. Unfortunately 3 of the 4 companies were brutal almost to the extent that Pan American was on their offers.

But, one, a major US A+ rated life insurance company, quoted standard plus and no flat extra. Remember this guy only wanted $250,000 and for a 20 year term that meant around $1500 a year for 20 years guaranteed level. If he had wanted $500,000 it would have been under $3000 a year, with no flat extra! The only caveat was no different that anyone else, not even Pan American. App and exam and acceptance in the US.

My client tells me that Jamaicans have one of the highest rates of prostate cancer and he’s already yelling from the rooftops.

Bottom line. Every life insurance company is different and you never know what you can get until you ask. If this post speaks to you, give me a direct call or email me for a personal consultation.

“I would gladly recommend Ed Hinerman to businessmen anywhere. When my New York Life agent told me that my 80 year old business partner couldn’t get life insurance, Ed not only got it for us, but at preferred rates. It was key to our buy/sell agreement and when he passed away last year I was able to buy his share of the company from his family with the life insurance proceeds. Thanks for going the extra mile.”