Winter kill, a term used to describe those wild animals that don’t survive an over harsh winter, or are old and/or weak from disease and succumb to the normal hardship of winter, holds a grip on my life also.

About this time of the year, every year, I really wonder if I’m going to survive to those wonderful spring days and even more wonderful days of summer that revive my body and soul. I’m not exactly sure what it is that would kill me. A fatal case of cold feet? Shivering to death? Shoveling snow?

I’ve heard of cabin fever and maybe what I have is a 21st century version of that. I can’t go out for a run in shorts and a t-shirt so I feel, not just the walls closing in, but even all the clothes a person has to wear just to survive. I start thinking crazy things. I mean go figure this recurring thought as I look up at one of the nearby peaks. “I wonder how long I would last up there if I was naked”? 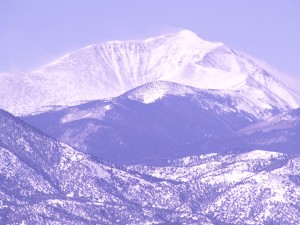 Would my life insurance cover me if they found my naked body frozen to that peak in the spring? I feel confident it would. Even if they ruled it a suicide, I’m past the suicide clause in my life insurance policies. Although it would be a stretch to call it suicide since I would have to be either dropped out of an airplane or drug up that 14,000 ice cube kicking and screaming all the way. Far more likely a homicide.

And don’t get me started on that hideous joke on mankind called daylight savings. I get up and come to work early. That’ s tough in the winter when I wake up in the dark and for a month or so come to work before the sun comes up. But it’s the waking up part where the government mandated time change nearly kills me each spring. Just when I am starting to enjoy the fact that it is actually light, not sun up, but at least light when I wake up, they do it. They change the time and for about 3 weeks I am thrown back into waking up in the dark. It sucks. Every spring I threaten to move to Arizona where they don’t do that awful ritual.

Bottom line. My blog. My forum to occasionally share a little whine.